The Amityville Horror: The Murders and the Myth 38 Years Later

Lauraplant82 July 31, 2017 Retro Reviews Comments Off on The Amityville Horror: The Murders and the Myth 38 Years Later

The details of the supposedly true haunting by a demon in the home leave us all shivering when we think of them. The film was followed by several sequels and a remake starring Ryan Reynolds and Melissa George in 2005. The Amityville home, located on 112 Ocean Avenue in Long Island, New York, was recently purchased for a whopping $850,000 US… possibly a horror fan with a penchant for flies?

Both the 1979 and the 2005 film version of The Amityville Horror were based on Jay Anson’s novel, which was released in 1977. The plot involves a young family that moves into a home where a man murdered his entire family a year prior.

This is a fact: twenty-two year-old Ronald “Butch” DeFeo, Jr. went on a midnight murder spree throughout his Amittyville home in 1974. He shot and killed both of his parents as well as his four siblings: Dawn (18), Allison (13), Marc (12) and John Matthew (9), as they all slept soundly in their beds. The fact that none of the other DeFeos tried to fight back during the massacre – as a matter of fact, only his mother, Louise, and sister, Dawn, were even proven to be awake – despite the fact that Butch was using his .35 Marlin rifle to shoot them all in close quarters, started the rumor that the young man was possibly possessed and had some sort of supernatural help in keeping his family quiet and laying on their stomachs in bed during his rampage. Neighbors who had been awake during the murders only heard the DeFeo’s dog, Shaggy, barking in the night.

Was there a demonic presence at play in that Amityville home? The answer is: we may never know. Famous paranormal researchers Ed and Lorraine Warren were involved in the investigation of the home. At the time, the couple were celebrated as the paranormal world’s leading investigators, as reiterated in 2013’s The Conjuring.

Time has proven this to be a somewhat inaccurate portrayal of the couple. Nonetheless, there are certain qualities of The Amityville Horror that none of us will forget quickly. We don’t want to believe the stories aren’t true for some reason and continue to believe the possibility of the impossible. In one of the more gripping scenes of the film, the unfortunate priest that came to bless the home felt nauseated and was then attacked by a swarm of flies that seemed to have been purged by the dark soul of the home itself. Did this really happen? Also, is it true that every night at 3:15, George Lutz would awake and feel the urge to check the boathouse? The DeFeo family had been murdered at approximately 3:15 am. 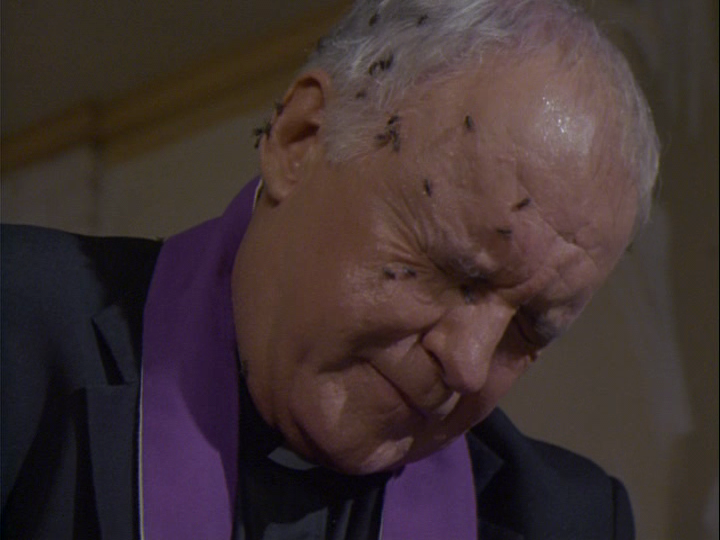 An invisible young girl, Jodie, would become the Lutz’s 5 year-old daughter’s newest playmate, as well as a myriad of other sightings, discoveries, physical problems and odd coincidences plagued the family, which culminated in George Lutz supposedly attempting to murder his own family! Twenty-eight days after they first moved in, the Lutz family narrowly escaped the house with their lives, leaving their belongings behind, but not before a harrowing journey through a hole filled with (what was that anyway? blood?)…something, to rescue the family dog. The spiraling depression of Lutz is well portrayed by James Brolin, and again by Ryan Reynolds in the 2005 remake. Can a home’s dark history really conjure up such emotion in a person? Or perhaps it was the fact the Lutz had put all of his savings into the home, and the stress of that was getting to him? If none of the stories are true, than why did the family flee their apparent dream home just one month after moving in?

To this day, DeFeo remains in prison for the crimes serving six life sentences, but no motive has been discovered. DeFeo claimed he had heard voices inside the house commanding him to murder his family. Could these voices have been the same ones that supposedly attempted to convince George Lutz to commit a similar crime a year later? Of course, we will never know… but perhaps believing so, and knowing the grizzly history of the home, somehow enraptures the viewer well enough to be convinced, that at the very least, The Amityville Horror will continue to be a classic for many years to come.

Hi there! I'm a mid-30s, Torontonian, virgo, true-crime obsessed, horror-obsessed, travel-obsessed, ...scrabble-obsessed, stargazing wannabe-novelist. I'd love to meet ya! :D Here is the link to my submission for Pophorrors 'meet the writers' segment: https://pophorror.wpengine.com/meet-our-writers-laura-plant/
Previous Run-Time for IT Movie is Revealed
Next Fantasia 2017 Festival: ‘Most Beautiful Island’ is Surprisingly Suspenseful