The tagline for Tobe Hooper’s classic horror film, The Texas Chainsaw Massacre asks “Who Will Survive, and What Will Be Left of Them?” While the marketers behind the line literally refer to the chainsaw mutilations and slaughterhouse gore of Leatherface’s exploits, they inadvertently got to the central question of all horror cinema. When we talk about horror, we’re talking about survival, about loss, pain, and mutilation, not only of the body but of the sense of safety born into every body. To know horror is to never feels truly safe again.

This unsettling truth groans and twitches in every frame of Mattie Do’s Laotian time traveling ghost story, The Long Walk. The film revolves around a man (played by Yannawoutthi Chanthalungsy) who stumbles upon the ghost of a woman killed in a tragic accident. The ghost grants him the ability to travel back in time to his boyhood and relive the moments leading up to his mother’s death.

Mattie Do brings to life a strong, compelling approach to the nexuses of horror, grief, and the cyclical nature of both. The camera acts like a ghost, following the protagonist (listed in the credits only as The Old Man) through his daily routine, his grief, his routine. The ghost is treated less like a horrific apparition and more like a friend, a tangerine-eating, smiling companion wandering the woods. In a grounded, approachable performance from newcomer Noutnapha Soydara, the ghost is given all the texture and brightness of whatever fruitless hopes cling to the shock of losing someone you love. The Long Walk is the work of a filmmaker at the height of her powers and makes me hopeful and eager for whatever will come from her camera next.

Written by Christopher Larsen, The Long Walk’s strength lies in its realistic dialogue and universal approach to death. The connection between The Old Man’s mortality, the ghost, and the mother’s death all triangulate around the emotionally devastating truth that death reminds us of what we’ve lost, what we could lose, and what we can’t prevent ourselves from losing. The world of The Long Walk is one where grief, and living with it, can be a death of another sort.

Normally, time travel is a narrative device that immediately sends my eyes rolling into my head, but The Long Walk treats time manipulation as one of any number of squandered privileges that The Old Man has access to. We immediately get the impression that his supernatural relationship to the past is as routine and rote to him as the narrative concept of time travel is to us. His boredom circumvents the need for yet another torturous exposition scene around bending the laws of physics around messing with time. In this universe, he can do it, and that’s all we need to know to make sense of the story that Do and Larsen wish to tell. Moreover, power to visit the past doesn’t inoculate The Old Man from the ravages of time, as we see the weariness, the years, pressing down on his life. 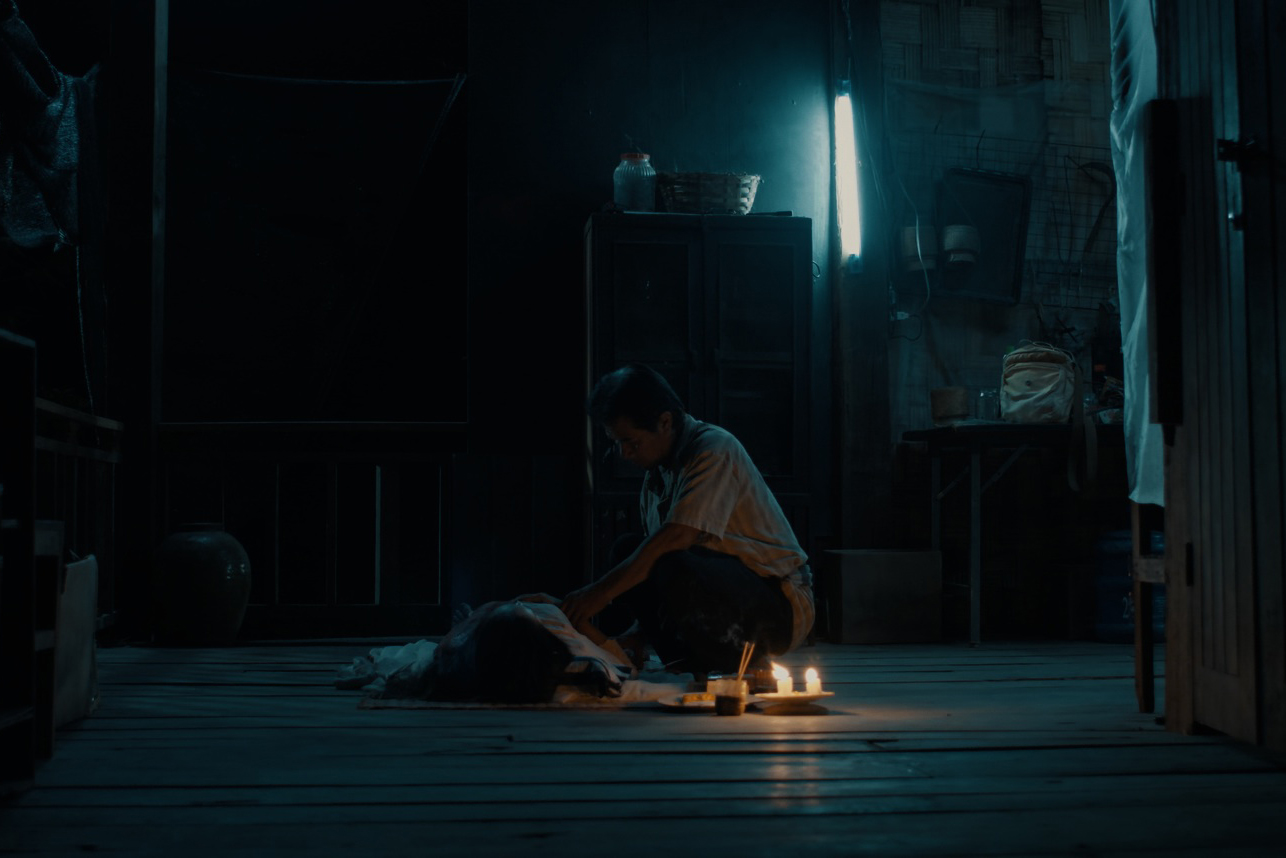 Perhaps that’s the horror at the heart of the film, the inescapable randomness of death, the way it grafts itself onto The Old Man’s life and constantly tempts him with the addictive grief of losing the person closest to him even fifty years later. The horror of being a person hurts and discomforts us as effectively as any bloodthirsty spectre. The effect it has on The Old Man’s mind, an on the ghost herself, is truly devastating.

The community, too, isn’t immune to the effects of time as Laos marches into the modern age alongside The Old Man and his grief. His village seems largely unaffected, but the effect of this obstinance becomes apparent as tourists pour in for a taste of life undisturbed by the technological here and now, ironically ripping from the village the very serenity that drew them there in the first place.

The Long Walk is a ghost story, a grief story, and an honest, thoughtful exploration of how those two kinds of story are often the same thing. Those seeking answers to the questions leveled by Texas Chainsaw Massacre’s timeline all those years ago, the questions at the heart of any horror story, will not find them here, but will instead find a meticulous and unforgettably human meditation on death, life, and what it means to lose both.

Billie is a horror obsessed writer with a love of Giallo, Vincent Price, and any horror movie set in the West. She can't wait to tell you about how Videodrome is a sci-fi horror love letter to trans girls like her.
Previous Drafthouse of Horrors Celebrates the Month of October with 31 Days of Horror
Next ‘The Divine Fury’ Coming to Blu-ray and Digital this November