We’ve been following filmmakers P.J. Starks and Eric Huskisson since the site first started in 2016 when we interviewed them (read P.J.’s here and Eric’s here) for their film, Volumes of Blood (2015 – our review). It’s been 6 years, and this dynamic duo are still creating creepy, funny, bloody horror tales. Their latest project, New Fears Eve, is now coming together, and we wanted to find out more about this time-turning feature.

PopHorror: You’ve been directing and producing films for nearly 15 years now. Tell us a bit about your journey and what you’ve created so far.

P.J. Starks: I got serious back in 2008 with a no-budget horror comedy called Hallows Eve. It was basically my take on Scooby Doo only made for adults. It had a short DVD run and never got distribution, so it fell far into obscurity. I followed that up with a short psychological drama called A Mind Beside Itself. I wanted to prove I was capable of more substance, you know? Not just blood, gore, and cheesy one liners. The problem with non-horror indie projects is that you really struggle to find an audience.

In 2014, I created, co-wrote, and produced Volumes of Blood, which is the project that changed it all. Put my name on the map and started my partnership with Eric [Huskisson]. We’d go on to start Blood Moon Pictures. Since then, together we’ve produced the short fan film, The Confession of Fred Krueger [PopHorror review], our follow up, VOB: Horror Stories [PopHorror review], and 13 Slays Till X-Mas [PopHorror review]. VOB also opened an incredible door which allowed me to collaborate with other filmmakers on their films, and I’ve executive produced a whole slew of very cool projects since then.

PopHorror: What pushes you to continue creating horror?

P.J. Starks: It’s a lot of factors. It’s my favorite genre. My grandmother, Gi-Gi aka Almeda, instilled an appreciation for horror when I was young, so it’s become my first love. I’ve said this a thousand times but horror films the rare opportunity to cohesively mix a lot of varied genres into a single narrative. Ultimately, I’m too stubborn to quit, therefore, I’ll always be involved with or creating something horror-based if I’m physically able.

Eric Huskisson: I’ve been a fan of horror since I was a kid, but what pushes me to create horror is the strong community within the genre. It’s such a huge family of likeminded people even when it breaks off into its own sub-genres. Everyone is so friendly and generous with their support when we’re in the middle of a project or at a con. There are so many horror websites, podcasts, festivals and cons supporting every aspect of horror all year around. With all that said, who doesn’t want to be a part of creating horror? Horror fans are the greatest fans!

PopHorror: You both seem drawn to anthologies. What is it about the short story format that you like?

P.J. Starks: We’re weekend warriors due to having full time jobs. Filming a series of shorts to create a feature has been our modus operandi simply out of necessity. I absolutely love anthologies. They’re some of my favorite films and have become a guilty pleasure sub-genre, but creatively, you always want to push yourself, and that is why we’re going with a single narrative with our new production, New Fears Eve.

Eric Huskisson: Ironically, our newest film New Fears Eve is a single narrative feature, but I get the draw to anthologies. Anthologies are unique because you can use several random shorts to make a full movie, or you could use several shorts designed around one central story. Anthologies can also be manipulated in several different ways which makes them fun to work on. They also give a true storyteller a way to get all their ideas out there all at once instead of one at a time. Also, when you use the short story format, it gives other actors, directors, and other behind the scenes talent an avenue to showcase their expertise. 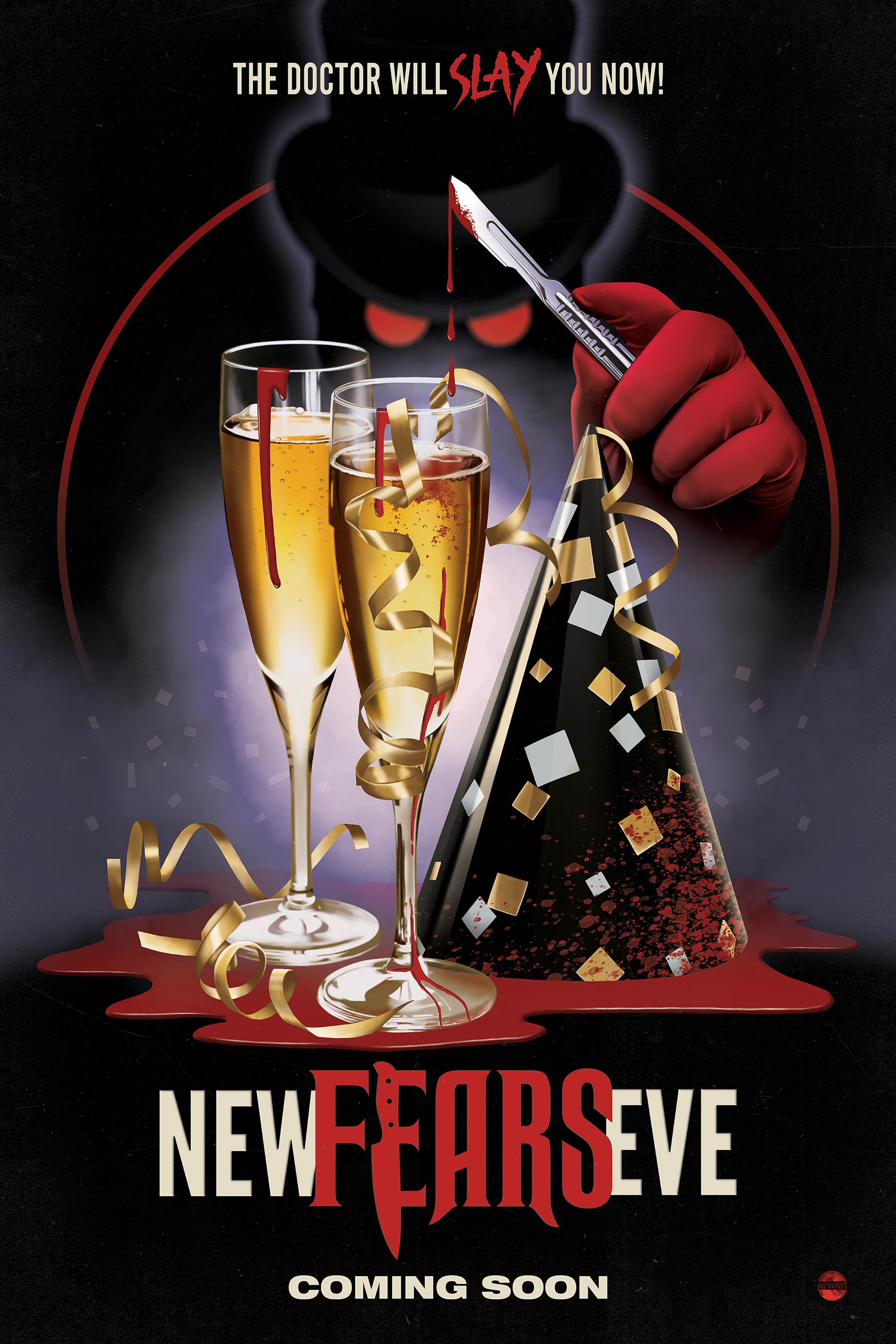 PopHorror: What else can you tell us about New Fears Eve? What’s it about?

P.J. Starks: It’s a slasher horror comedy about three best friends who work for the same company that is holding a mandatory New Year’s Eve party, and of course, none of them want to attend. Unbeknownst to the trio, they’re being stalked by a sadistic serial killer called The Doctor who follows them to the party where all hell breaks loose. There’re scares, laughs, and a good mix of fun and atmosphere. So far, everyone involved loves the script. We’re pretty certain it’ll be something fans of the genre will dig.

P.J. Starks: Being as our last holiday was Christmas, it wasn’t entirely by design. We did joke about doing something about doing something Auld Lang Syne, but nothing serious was really discussed because there’s another script I’ve written we’ve been wanting to produce. I was driving one day, and the title New Fears Eve popped into my head. I thought it sounded cool and immediately asked myself, “What’s the story there?” I conceived the synopsis, then pitched it to Eric. The rest is history.

PopHorror: Who else is involved?

Eric Huskisson: We have several horror icons coming on to act in this project. Hannah Fierman, Felissa Rose, Dave Sheridan, and LC Holt all have acting roles. Felissa and Dave are also producers on the project. Lily Harvey, Matthew Tichenor, and Turner Vaughn are three new local actors that will be a major part of the film as well. We also have one other horror icon attached to the project who will be acting and producing but we won’t announcing them for a week or two. PopHorror: Where are you now in terms of production? What’s up next?

Eric Huskisson: We are right in the middle of pre-production which includes financing and the beginning of scheduling. They are absolutely our least favorite parts of the production process. Once those are completed or near completed, then we can focus on our first shooting weekend! Once shooting starts, P.J. and I can breathe a little and put our true talents to work!

PopHorror: How can we help?

Eric Huskisson: The best way anyone can help right now is with donations and support through our Indiegogo campaign. New perks are still being added, so always check back if you don’t see something you’re interested in at first. Also, whether you choose to donate or not, you can still share our page to get the campaign out to others.

P.J. Starks: We excitedly reached our first goal of $30,000 thanks to a ton of incredibly supportive individuals. There are still additional funds that must be raised to finish the film. Thankfully, by meeting our goal, our current Indiegogo campaign has gone In Demand, which means we can continue to accumulate funds for our budgetary needs. If anyone is interested in supporting our project, they can check out our campaign. There’s a ton of great perks from Being in A Scene with Dave and Felissa and Getting Killed in the film. If you’re a musician, you can Get Your Song in the Film. Of course, there’s the ever-popular Blu-ray, which is what we need to sell the most since that’s the best way to own the film.

Thank so much for chatting with us, guys! Stay tuned to PopHorror for all of your New Fears Eve updates!

As the co-owner and Editor-in-Chief of PopHorror.com, Tracy has learned a lot about independent horror films and the people who love them. Now an approved critic for Rotten Tomatoes, she hopes the masses will follow her reviews back to PopHorror and learn more about the creativity and uniqueness of indie horror movies.
@Icing_Yousing
Previous Available Now on DVD and VOD: Michael Su’s ‘Bridge of the Doomed’
Next A Chat With Noah Segan, Writer, Director, Star Of ‘Blood Relatives’