There are very few horror movies that affect me like the ones that come out of Japan. Steeped in the myths and folklore of the region and dripping with a pantheon of fears I don’t understand but feel with every inch of my skin, Japanese horror movies like Takashi Miike’s Audition (1999) and Kiyoshi Kurosawa’s Pulse (2001) are masters of making my hairs stand up. This island is also the birthplace of the most iconic creature feature of all time, Godzilla (1954).

I’ve also found chills in Japanese literature. Author Ryu Murakami burned my life down with his novel, Piercing, which was recently adapted by Nicholas Pesce in 2018 (read our review here). Koushun Takami’s Battle Royale showed another side of the country’s horror. But one of the country’s most prolific mediums eluded me:

Like any kid of my generation, I watched Dragonball Z, Gundam Wing, and everything else that showed up on Cartoon Network’s Toonami programming. When I got older and grew into my love of horror, however, I never felt the urge to look back. This meant that I missed out on one of the most confusing, wonderful, unnerving, and rewarding ways to consume the genre.

For the month of May, I intend to remedy that. I’ve selected 5 horror anime for AniMay to watch and write about every Friday, all month long (you can read week 2’s article here), and I can think of no better way to start than with Karen Suzuragi’s Higurashi, also known by its English translated title, When They Cry.

This will likely be the hardest part of these reviews. Anime, I’ve noticed, has sprawling storylines and operates with the same pacing and twisting as Western soap operas, only tinged with that distinct Japanese weirdness I’ve come to love. When They Cry follows four or five school children in a small town plagued by a curse. They’re all preparing for a festival and find themselves investigating and suffering from that curse. At the end of each festival curse cycle, the world resets and the story begins anew with the same characters preparing for the festival all over again. Through this unending tableau of violence, we encounter torture, mistaken identity, murder, board games, and a giant cleaver. It’s a lot. 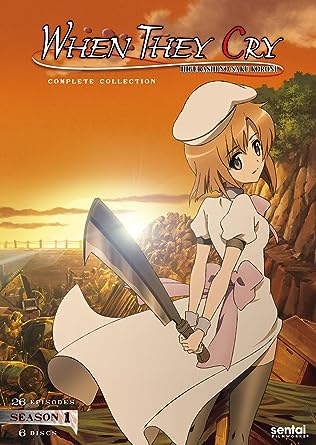 I expected the slow, despairing oppression of Japanese horror cinema in When They Cry, but what I found was something closer, surprisingly, to Italian gialli. The series opens with a nightmarish sequence of a child bashing in the skulls of two unidentified victims with a baseball bat. Then, we wake up somewhere else and meet our main character, Keiichi Maebara, and follow him to school in the small village he just moved back to.

He meets his friends and the story becomes a bizarre, Twin Peaks slice of life, showing all of the quirks, rivalries, affections, and tensions of this group as they picnic, play games, and prepare for a festival. The brutal violence of the first scene infects these happy moments with a foreboding. It encourages the viewer to question every smiling townsperson, to greet every moment with dread. Demons, detectives, ghosts, and suspicion cloud the characters and the town. This weirdness puts you, even in the most quotidian moments of the show, on the edge of your seat. I bring up Italian gialli intentionally, because these share some DNA. The esoteric art style, the slow-then-suddenly-not-slow pacing, and the almost pornographic way violence explodes onto the screen remind me of the best parts of Argento, Bava, and Fulci.

Very. One of the things I’m coming to understand is that even in the most horrifying and frightening stories of anime, there are these genre bending moments of humor, romance, slapstick, and deep emotional drama. These make stories like When They Cry three dimensional and layered. There’s an English language dub of the series, but I recommend the original Japanese language version with subtitles.

This was a nice start to my month long journey into AniMay, and I look forward to our next excursion into this thrilling, esoteric world of animated blood, gore, suspense, and weirdness. Are you a fan of When They Cry? Let me know and stay tuned for my next Horror AniMay review!

Billie is a horror obsessed writer with a love of Giallo, Vincent Price, and any horror movie set in the West. She can't wait to tell you about how Videodrome is a sci-fi horror love letter to trans girls like her.
Previous Tribeca Film Festival Review – Bliss (2019)
Next I Like My Coffee Black Like My Soul: 14Eight Unboxing