The basis for most horror films is the fight between good and evil. Sometimes the good guys prevail while other times they are not so lucky. In 1995, this concept took on a new meaning when our old pal the Crypt Keeper returned to bring us a full feature-length film. That’s right, kiddies! Tales From The Crypt transitioned to the movies! The success of the HBO series was no secret. However, the half-hour segments always went by so quickly. Fans were left wanting more. Ask and you shall receive: The Crypt Keeper calls this tasty tidbit Demon Knight.

Demon Knight begins with an intense car chase between Brayker (William Sadler) and The Collector (Billy Zane). At this time, we do not know much about them. Brayker is the one who’s running from The Collector. Sounds like an ideal time to run out of gas. Am I right? Needless to say, the car chase turns into a car crash and both parties walk away with no cuts or bruises. This leads us to believe there is more going on than meets the eye. Who is the bad guy and who is the good guy?

In the next scene, Brayker finds shelter at a local hotel that used to be a church. We are introduced to an array of new characters, including Jeryline (Jada Pinkett Smith), Irene (CCH Pounder), Uncle Willy (Dick Miller), and Roach (Thomas Hayden Church). The hotel owner, Irene, is skeptical about the mysterious stranger who has graced her presence at the hotel. So, she calls the local sheriff to get down to the facts. When the sheriff arrives, it is to Brayker’s dismay to see that The Collector is with him. Things do not go well after that. 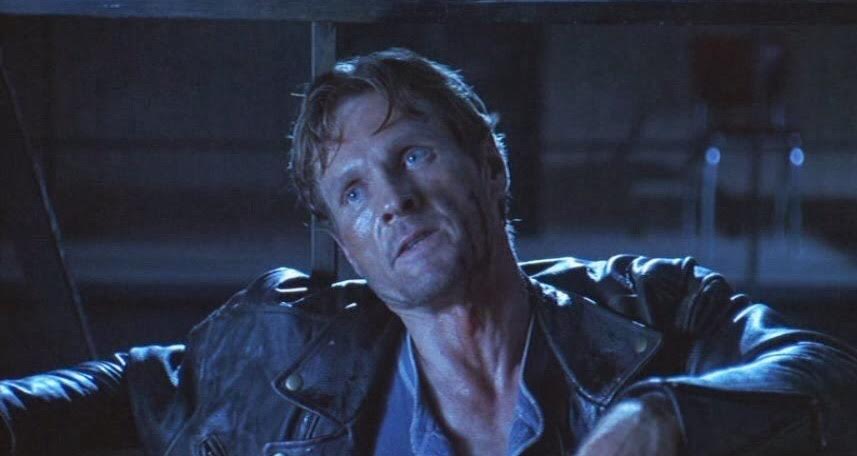 Allow me to delve into the many reasons this movie kicks ass. First, the storyline is a clever one. As I mentioned earlier, horror films are typically based around the bad guy and the good guy. Also, it helps that both roles in this film are clearly defined and well-cast. Sadler and Zane brought the essence of the story to life. Without them, Demon Knight would not have been the same. Second, the effects and make-up are effing sweet. The demons are super creepy. Please note, I viewed this movie when I was eleven years-old, so at the time, they scared the shit out of me. Watching the film now, they are more comical, but I cannot tell a lie. They still freak me the fuck out. Reference the photo below.

I’m proud to say that Demon Night is included in my top 20 favorite horror films of all time. You know you love a film when you still quote it twenty years after it was made. Here are some of the best quotes from the film:

The Collector: “Just give me what I want and nothing will happen to you.”

The Collector: “Fuck this cowboy shit! You fucking ho-dunk, po-dunk, well then there motherfuckers!”

The Collector: “You want your arm back, Irene? I can make it happen.” (Irene raises the stump of her arm) The Collector: “Is that a yes?” Irene: “No. That’s me giving you the finger, asshole.”

The Collector: “All right. I know what you’re thinking. You give up your soul, you turn into a demon, you look like shit. Where’s the payoff, right?”

Directed by Ernest Dickerson, Demon Knight is a witty, comical gorefest. We cannot go without congratulating the voice behind The Crypt Keeper, John Kassir. He was able to effortlessly create one of the most beloved horror icons of our time. I believe the true intention of this film was to be entertaining and fun. It always puts a smile on my face. When another twenty years passes, it will continue to do so. Until next time, kiddies! The beast is yet to come!

Nikki has always been a fan of all things horror. At the ripe age of four, she became an instant Freddy Kreuger fan and the rest is history. She has aspirations of writing a horror novel someday so writing horror articles is right up her alley! She currently resides in Des Moines, Iowa with her boyfriend and two dogs.
Previous Brackish (2015) Movie Review- Reviving the Dead
Next Train to Busan (2016) Movie Review – Zombies On A Train!