Let’s talk, you and I, about legends. Let’s talk about tall tales and folklore and myths. Now that we’re all in the right state of mind, let’s talk about Lon Chaney. Born to deaf and mute parents in 1883, Leonidas Frank Chaney became one of the most prolific and talented actors of silent horror cinema. In 1912, when he first debuted in film, he adopted the name “Lon Chaney.” If any figure in horror cinema deserves a tall tale, it’s him.

Name an iconic face or figure of that era, and I promise you Lon either played them or could’ve played them better than who did. This is the man the press called “The Man With 1,000 Faces.” This is the man who almost lost his legs playing a deformed criminal mastermind in The Penalty (1920) (for the film, Lon had his legs bound in a harness to appear as though his legs stopped at the knee, and, due to long hours, drastically cut circulation to those legs). This is the man who wore fifty pounds of facial prosthetics to bring the classic Hunchback of Notre Dame (1923) to life with his portrayal of Quasimodo. 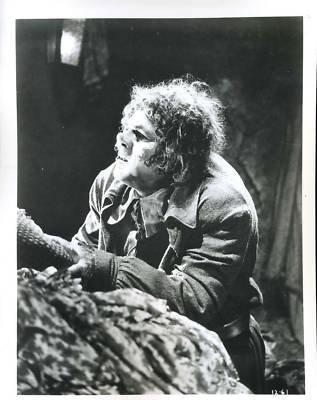 We, as fans, sometimes forget that horror is older than us. Before there were Michael Myers and Freddy and Jason and Leatherface, there were other, even older icons, and most of them were brought to life by Lon Chaney.

In a famous quote often attributed to him, Lon Chaney says, “There’s nothing funny about a clown at midnight.”
Perhaps there isn’t, but there can be something memorable, chilling, and great. That’s what Lon Chaney’s legacy leaves us with… a clown at midnight. A trained, masterful entertainer bathed in a kind of unsettling darkness. And that image can leave an impression.

We’ve all seen that one terrifying black and white photo from the classic Phantom of the Opera (1925). That image was brought to you by the masterful and self-sacrificing genius of Lon Chaney (who pushed his face back with piano wire for the role).

Lon Chaney has one hundred sixty-two acting credits on his IMDb page. One hundred sixty-one of them are silent films – the only talkie being a now-with-sound remake of the The Unholy Three (1925). Lon Chaney was a star of silent movies because he knew how to convey entire worlds of words without speaking. He knew how to pantomime and tumble and clown. He knew that silence wasn’t a limit, it was a language.

There was an old joke floating around Hollywood during the silent film era and it sums up Lon’s legend perfectly:

A man is walking with a friend at night and sees a cockroach under a street lamp. He goes to stomp on the bug.

His friend stops him short. “Don’t!”

The man is puzzled. “Why not?”

The man and his friend laugh and walk away from the street lamp, when over their shoulders they hear a voice from from nowhere say “Thanks, good man. Your friend almost ruined the movie.”

There’s always truth to humor. Lon Chaney, in the dark corners of the Hollywood that he reigned over, could be anything. Even when he died in 1930, Lon Chaney sealed his legacy with a son, Lon Chaney, Jr., who you might know by another name: The Wolf Man (1941), the very first one.

That’s how you build a myth, a tall tale, a legacy. You get a man with great talents, you get a body of work that would put any modern star to shame, you get a family tree, and you get a name that is as deeply baked into Hollywood horror as any you’ll ever hear. You get Lon Chaney, Sr.: A man, a myth, a legend. A star you can only see when the night is at its darkest.

Billie is a horror obsessed writer with a love of Giallo, Vincent Price, and any horror movie set in the West. She can't wait to tell you about how Videodrome is a sci-fi horror love letter to trans girls like her.
Previous Director Mark MacNicol Works On Getting Funds For ‘Dreaded Light’
Next 7 Witches (2017) Trailer Review