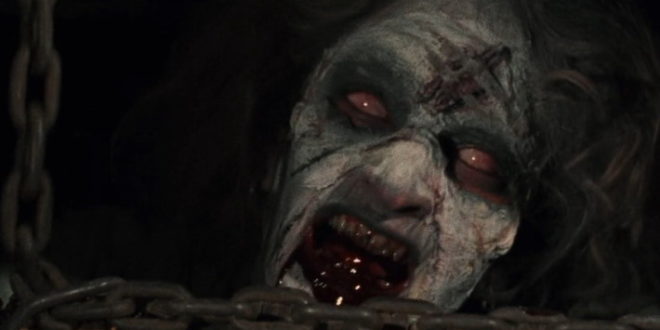 Any fan of horror films knows that the genre is constantly changing and evolving with every film trying to top the last box office hit.  More often than not, most mainstream horror films try to accomplish this with cheap jump scares and an over-abundance of gore and brutal death scenes. However, there are some classics that have stood the test of time, spawning countless sequels and inspiring remakes. The following are 5 horror films that have done just that, which also happen to be my top 5 favorite horror films of all time.

Originating from the mind of John Carpenter, Halloween has become one of the most recognized franchises in horror film history. With a small film budget of $300,000, this classic became an unexpected success grossing $47 million at the US box office, winning 4 awards and 2 nominations. Jamie Lee Curtis stars as Laurie Strode who lives in the small and quiet town of Haddonfield, Illinois. However, when Michael Myers returns to Haddonfield after escaping from a mental hospital, Laurie’s life is turned upside down when she is stalked while her friends begin to die one by one on Halloween. Using creative filmmaking techniques, Carpenter builds the suspense during the stalking scenes by allowing you to see through Myer’s eyes while hearing his shallow breath under his mask. As the film progresses, the approach changes to showing the killer in a white mask from a distance in several scenes that follow. However, once the killing begins, Myers is shown up close and personal, until finally, the brief scene where his mask is pulled from his face giving the audience a glimpse of what’s underneath. With a critically acclaimed score adding to the creep factor, this will stalk the horror scene for decades to come.

Speaking of low-budget success stories, The Evil Dead not only won 3 awards and 1 nomination with a budget not much bigger than Halloween, but it launched the careers of writer and director, Sam Raimi and B-movie fan favorite, Bruce Campbell. This cult classic takes place in a rustic cabin dwelling deep in the woods far from civilization. A group of friends traveling to this cabin for an outing, unintentionally unleash an evil force of demons. With over-the-top action and cheesy, low-budget special effects that still retain a certain creep factor, this film will make your skin crawl while inducing moments of laughter. The Evil Dead has permanently possessed its place in horror film history.

Another horror classic that infuses comedy with over-the-top action is Feast. Barricaded in a bar, a group of patrons must find a way to survive attacks by unusual, grotesque monsters seeking revenge. Directed by John Gulager, Feast has an array of familiar faces including Henry Rollins, Balthazar Getty, Jason Mewes, Judah Friedlander, and Krista Allen. Okay, maybe this isn’t yet a classic, but it is a monster flick that delivers nonstop creepy action and laughs that any B-movie horror fan can appreciate. Written and directed by the late Wes Craven, A Nightmare on Elm Street features an all-star cast including Johnny Depp’s first big screen appearance as Glen Lantz, Heather Langenkamp as Nancy Thompson, and Robert Englund as Freddy Krueger. The story centers on Nancy who unearths her town’s best-kept secret when her friends begin to die at the hands of the dream demon, Freddy Krueger. This classic is said to have been inspired by some mysterious deaths related to Sleep Paralysis: a sleeping disorder that potentially can result in death. Winning 2 awards and 3 nominations, A Nightmare on Elm Street is well-written with a steadily escalating plot, as well as Englund’s iconic portrayal of Krueger. This film will be sure to haunt your dreams for many years to come.

From the mind of horror author Clive Barker, Hellraiser is my top pick among horror film classics. Based on Barker’s 1986 novella, The Hellbound Heart, Hellraiser was given the unique treatment of being written and directed by the story’s original creator thereby making the film adaptation mirror the book with subtle differences. When an unfaithful wife assists her former deceased lover to escape Hell, four demons are inadvertently summoned and seek to restore the rightful balance of things. With an elaborate storyline of love, lust, greed, and a mysterious puzzle known as Lemarchand’s box, Barker nails the depiction of pain, pleasure, and the dreaded darkness conveyed from his writing. Of course, Doug Bradley’s hauntingly unforgettable performance as Pinhead hammers home this one of a kind film. Winning 2 awards and 5 nominations, Hellraiser is solidified as a true horror film classic.

Previous Name That Horror Movie in Just One Gif!
Next “The Lost Boys” Sequel Is Coming… In Comic Book Form!