Every week, PopHorror picks a horror movie and tries to find a risky or unexpected double feature. We write up our reasons, and then take to social media to find out if our pick is a great night at the theater or a disappointing double bill! Will It Work? See a few previous picks here: Pitch Black and Bone Tomahawk, Midsommar and Two Thousand Maniacs!, Get Out and The Devil’s Advocate

The night is quiet, still, and the atmosphere is thick with tension and dread. A Shape against the dark and streetlights. In his hand, something metal and wicked gleams with ill intent. Nothing can stop him from his goal. These unassuming small-town streets won’t know what hit them.

And just like that, we’re there in Haddonfield, Illinois, aren’t we? We’re already watching Michael Myers bend his body into shadows, seeing his empty eyes in every window, and warning Laurie that he’s coming. No movie has had an impact on a genre like John Carpenter’s Halloween (1978). Out of those teenagers’ various knife wounds spilled an entire new red ocean of horror movies. Slashers became king, crowned with a bleached William Shatner mask. 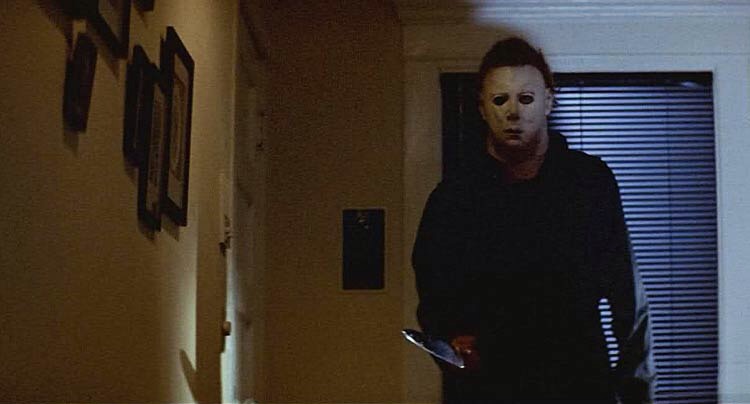 It’d be easy to pick any number of Myers’ imitators for a double feature. One could blow the dust off a copy My Bloody Valentine or The Prowler and pour crimson corn syrup over the popcorn until everyone goes home happy. That would be simple. But to write about Carpenter’s movie is to call down a vengeful God of the genre, and such a calling requires an appropriate offering. You already know about enough slashers to do that work yourselves.

Halloween also created a new kind of villain in Michael Myers. More than a murderer in a mask, these faceless, merciless killers changed the world around them into bubbling pits of moral uncertainty. Haddonfield, gleaming in the reflection of Myers’ knife, becomes a hell where anyone can die at any time. Killers can walk through gunshots, stabbings, and the need for exposition. Myers never tells us why he kills, he simply has, as Loomis tells us, “the devil’s eyes.”

Those eyes see the world differently, focusing on a straight line, interrupted occasionally by the casual deaths of whomever gets between them and what they want.

Thinking about those eyes brought to the perfect choice for a double feature.

No Country for Old Men

Cormac McCarthy’s 2005 novel and the subsequent Coen Brothers film in 2007 shocked audiences who were expecting a straightforward, desert detective thriller. The film transcends these expectations by transposing the archetypal slasher villain into another genre’s world. The reaction between crime story and horror villain has all the explosive, brilliant chemistry of water and magnesium. No Country For Old Men is a finely built, expert vehicle for powerhouse performances from Tommy Lee Jones as Sheriff Ed Tom Bell and Josh Brolin as Llewelyn Moss, but that vehicle runs on the high-octane terror of its villain: Anton Chigurh.

I’ve seen no better evolution of Michael Myers than Javier Bardem’s performance as the dead-eyed, bob-haircutted hitman. When Llewelyn stumbles upon two million dollars in the Texas wilderness and kicks into motion the events of No Country for Old Men, he becomes a nexus for the almost elemental force of Chigurh. It’s an arbitrary circumstance… Llewelyn winds up with the money, just like Laurie winds up at Myers’ childhood home. Moreover, both Laurie and Llewelyn are capable, likable protagonists you’d like to see survive their stories.

Chigurh and Myers, though, are unstoppable. Their powers come from similar, brutal, sacrificial rituals at the beginning of their respective films. They commit their sins against society – in Chigurh’s case, the murder of a sheriff, and in Myers’, the murder of his sister – and seemingly gain the immortality and powers of of death itself. Kill the law, kill the family… both of these acts spill the blood of polite society, and both of them anoint our villains and their iconic weapons. Myers and his gleaming knife, Chigurh and his gas-powered livestock stunner and silenced shotgun… both inhuman creatures pursue the objects of their desire, the property they feel is theirs. In their wake, they leave blood, broken glass, bodies, and the bleeding corpse of “normal life.” When they are injured, they wordlessly persist. When they are killed, they do not die. They are a plague, a dark reckoning riding into town.

The parallels continue, however, as both reckonings have their doomsayers. Woody Harrelson’s Carson Wells tries to warn Llewelyn of the fate that awaits him. Donald Pleasance’s Dr. Loomis evangelizes the wicked coming of Myers like a masked, murderous Christ, a passion play in which he is a trench-coated, half-mad John the Baptist.

Watching the two films back to back introduces you to a new kind of evil, then sends that evil out into something like the real world (or, at least, the real world of another genre’s rules) with compelling, terrifying results. It didn’t take long for us to travel to Haddonfield. Now, let’s watch Haddonfield come to West Texas.

So, what do you think: Halloween and No Country for Old Men… will it work?

Billie is a horror obsessed writer with a love of Giallo, Vincent Price, and any horror movie set in the West. She can't wait to tell you about how Videodrome is a sci-fi horror love letter to trans girls like her.
Previous Interview with Actress Sheila McCarthy for New Horror Film ‘Isabelle’
Next Official Trailer for Chelsea Stardust’s ‘Satanic Panic’