PopHorror Takes A Look Inside ‘The Barn’ – Movie Review

Tracy Allen November 30, 2016 Reviews Comments Off on PopHorror Takes A Look Inside ‘The Barn’ – Movie Review

The indie horror community has been abuzz with curiosity ever since Fangoria Magazine featured news and trailers from Justin M. Seaman’s horror flick The Barn. What is The Barn? Why is it so terrible? What could possibly be hiding behind its big, red door? PopHorror was recently honored with being one of the first reviewers to get their hands on this long-awaited retro slasher and we watched with baited breath. But was it worth the wait?

About The Barn… “From writer/director Justin M. Seaman, The Barn is a new film created to give fans of 1980s horror a bloody good time…

Trick or treat, smell my feet and DIE!!!

“It’s Halloween night in 1989 in the small suburban town of Helen’s Valley. Sam Daniels (Mitchell Musolino) is a teenage boy who’s obsessed with all things spooky, and this year, he has many tricks and treats up his sleeves. Knowing that this will be his last ‘Devil’s Night’ before graduating high school, he and his best buddy, Josh (Will Stout), decide that they must figure out a plan for the ultimate final sendoff. After watching a Halloween special of ‘The Rock Block’ hosted by Dr. Rock (Ari Lehman, Jason Voorhees from Friday the 13th), the duo devised a plan to see their favorite rock band live in concert! Wanting it to be a night to remember, they invite the girl next door – Michelle (Lexi Dripps), the group jokester – Russell (Nicholaus Joshua) and the star athlete and his rocker girlfriend – Chris and Nikki (Cortland Woodard and Nikki Darling) to tag along for the ride to raise a little HELL. “However,  diabolical trouble arises when the group takes a detour to party on their way to the concert. After finding an old, abandoned barn and waking the evil inside, the group soon realizes that the legend of an old, creepy barn and its monsters The Boogeyman, Hallowed Jack and Candycorn Scarecrow, aren’t just a campfire story anymore! It’s now up to Sam and his knowledge of the rules of Halloween to find a way to protect the group by defeating the demonic creatures that lurk within The Barn.” The film, which was shown on Saturday, November 12th @ 2:00 pm at the New York City Horror Film Festival, was not like anything we’ve ever seen before at PopHorror. The retro feel is legit, from the opening title card to the music played during the closing credits. As someone who grew up in the 1980s, I can say for certain that The Barn hits the nail on the head when it comes to its historic feel.

Seaman did such a great job creating that ’80s atmosphere that people watching it wondered how they ever missed this glorious bloodbath from 30 years ago. He even sold figurines through his website, attracting the attention of Nightmare on Elm Street, Friday the 13th and Halloween fans everywhere and creating, even more, mystique for the film. Everyone wondered: how did this creature feature/slasher/bloodbath from the golden era of horror slip by so many unnoticed? Even the horror geniuses were stumped. 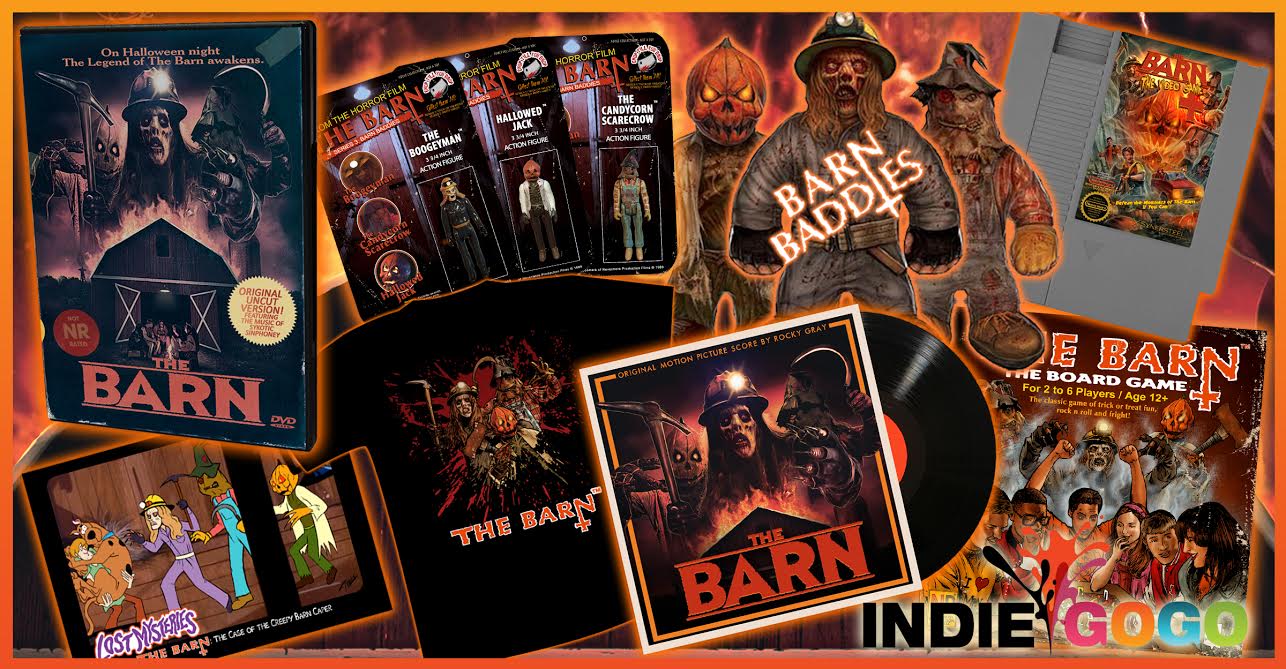 In actuality, The Barn was filmed over the past two years, whole and complete in the 21st century. The great part about it, though? The merchandise is actually available to purchase, right there on the website. You ‘ll be able to grab the DVD of the film as well within the week. Finally! The DVD will have audio commentary from Justin and Mitchell, the two trailers, “The Harvest” music video, The Barn video commercial, The Barn haunted house attraction commercial, a short film starring the Boogeyman that the filmmakers made years ago, the Indiegogo interview pitch video and some deleted scenes.

Disc 2 is The Barn: The Video Game on CD-Rom for PC. You read that right – there’s a video game for this baby! So start your Christmas shopping over at The Barn’s merch website. You can even get The Barn on VHS! Keep your eye out for Mitchell Musolino, who played the lead Sam Daniels. He was nominated for a Crimmy (Crimson Screen Horror Film Fest) for Best Actor, and that was before the official release! Another thing I loved about this movie was the music. Grammy award winner Rocky Gray scored The Barn, and I swear he was channeling 1978 John Carpenter when he did it. You may recognize his name – he also composed the score and music for Volumes of Blood: Horror Stories. Also, the party music from The Legendary Hucklebucks is a reason to watch the movie alone. A cross between rockabilly and horrorcore, these guys party like the place is on fire and they lit the match. They may look like a bunch of down-home, overall-wearing hicks, but they sure do know how to play! 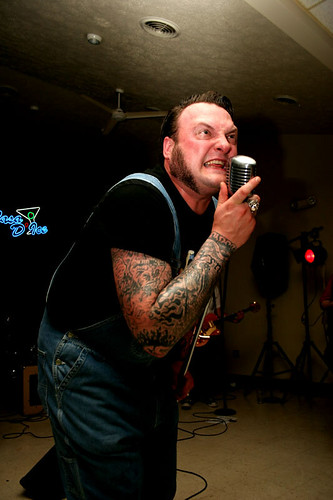 No slasher movie is complete without a heavy dose of blood-drenched slaughtering, and The Barn does not disappoint. Gore! Glorious gore! There is a lot of bloodshed in this puppy. A curly-haired kid gets offed in the first three minutes, and the film doesn’t let up from there. Throats are slashed. Skulls are hollowed out. Limbs are torn from bodies and fly through the air. Offal is dumped into piles right next to the hay bales. Heads roll. Fingernails skewer skulls. Even a game of Bobbing for Apples turns deadly. You might think that characters named The Boogeyman, Hallowed Jack and the Candycorn Scarecrow would be pretty tame by today’s standards, but you would be wrong. When the Candycorn Scarecrow unzips his mask and shows off the razor-sharp teeth in his fleshy gash of a mouth, that’s when you realize this is no elementary school monster. There’s no shortage of laughs in The Barn, either. I love a good dose of comedy in my horror and this fun flick offers the perfect amount. You know you’ve found a true treasure when you find yourself laughing while sweet, nearsighted old ladies offering candy apples are being disemboweled on the screen. There’s even a hilarious old drunk that no one listens to. What ’80s throwback would be complete without one?

I absolutely loved The Barn. Although I did think it took it’s time to get to the good stuff, once it got there, it went full tilt boogie. I have no idea how many gallons of fake blood were used in this, but I’m betting they needed a pallet to hold the buckets. The FX team got quite a workout, creating realistic looking body parts, hideous creatures and some fantastic retro Halloween costumes. Speaking of Halloween, I wonder if Nevermore Production Films will be selling Candycorn Scarecrow, Hallowed Jack and Boogeyman costumes in time for next October? I seriously can’t get enough of this movie. I’ll be doing some holiday shopping for myself over there at Nevermore Productions. I’m not the only one who loved what this film is about. Here are some props for The Barn from other websites – and all they saw were the trailers. Check it out! P.S. You can now buy it on Blu-ray as well!

“We may not know much about the new flick The Barn, but we can tell you this for sure… after watching the trailer and seeing the first bit of artwork, this thing cannot get here soon enough!”

“The second teaser trailer, which was released a few days ago, warns, ‘Be careful where you walk… be careful what you mock… and be careful when you knock…’ before introducing us to to three of the most ass kicking horror villains I’ve seen since… probably forever.”

“Anyone who’s a fan of horror movies that harken back to a simpler time (well, the ’80s) will want to take a gander at The Barn, which takes its cue from the gnarly genre flicks from that bygone era.”

So if you’re in the mood for some Halloween fun with laughs, music and lots of the red stuff, look no further than The Barn!

As the co-owner and Editor-in-Chief of PopHorror.com, Tracy has learned a lot about independent horror films and the people who love them. Now an approved critic for Rotten Tomatoes, she hopes the masses will follow her reviews back to PopHorror and learn more about the creativity and uniqueness of indie horror movies.
@Icing_Yousing
Previous The Walking Dead Season 7 Episode 6 “Swear” Recap
Next ‘Kong: Skull Island’ Looks Terrifyingly Beautiful – Official Trailer 2