In Celtic folklore, faeries would often sneak their children into human households by disguising them as infants. They would steal the baby from the crib and slip their own offspring in its place. The deceiving faerie baby is known as a Changeling. Imagine the horror of those parents. They create this life, pour countless hours of work and love and dedication into it, only to watch it leave into some faerie world, wearing their child’s face and doing God knows what.

In the documentary, Feels Good Man, about comic artist Matt Furie and his character, Pepe the Frog, you can glimpse a real life example of that horror. It’s beyond the scope of my imagining. If you’re reading these backlit words from across the internet, then you may already be aware of the green, emotional, froggy face of Pepe. You might be familiar with his visage, his popularity among the Extremely Online, or his unique place in the current political discourse. What’s rarer, however, is the awareness of where Pepe came from.

We open on Matt walking through how to draw the now-iconic, fraught frog, starting with Pepe’s  massive eyes and bulbous head shape. This process is interspersed with discussions of Matt’s history with Pepe and his initial existence in a comic called Boy’s Club.

What follows is a heartbreaking story of art, naïveté, and the poisonous way the internet transforms things. What began as a frog, standing and pissing with his pants around his ankles and justifying this behavior to his friend with the rationale that it “feels good man,” has become an official hate symbol on the Anti-Defamation League website.

As I watch, I’m struck by the notion of how staggeringly unoriginal White Supremacy is. Pepe is just one more stolen symbol in a long line, from the swastika (the perversion of an Indian religious icon) to various Norse mythological symbols, to the Heraldic Eagle of the Romans, to Moon Man, a racist rap-spouting re-appropriation of a McDonald’s ad campaign (their use of hip-hop in and of itself is an even more shameless example). Despite all their clamoring for a cultural sovereignty and a land of their own, I’m left scratching my head as to what kind of original idea would even flicker across the screens or blare from the headphones of that culture.

The documentary is brilliantly paced, with interviews from both sides of the discussion. Alongside Furie and his artist friends, there’s input from a 4chan user, a Trump communication strategist, and an occultist with some interesting things to say about the intersection of memes and magic. 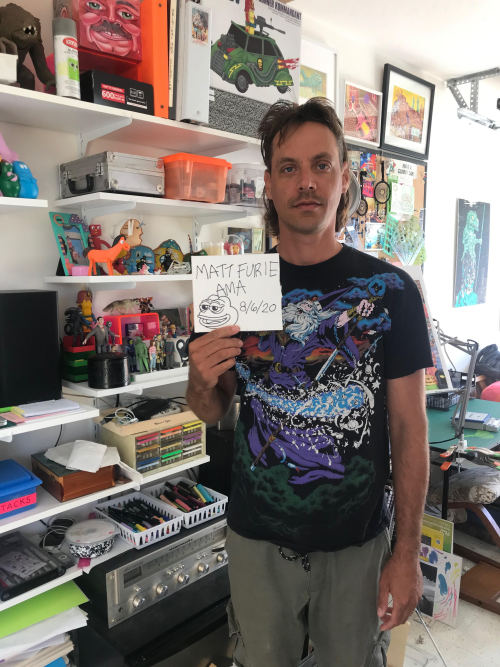 The horror, again, that puts Feels Good Man on this site’s radar comes from Furie’s journey. A smiling peace sign of a man goes from vignette to vignette, talking about his creation while flashes of Pepe prance across the screen holding rifles, insulting Hillary Clinton, deporting immigrants, and every other kind of conceivable nastiness one finds on the internet. Throughout, we watch Furie change, from mildly amused at the memetic other life of his froggy friend, to horrified, to angry, to finally resolute about setting the record straight.

Using Pepe as its catalyst, the documentary artfully interrogates how memes work and how cultures can react to the way their symbols are used. There’s also something uncanny about how reflective the story of Furie’s frog is. The fragile way 4chan reacted to the mainstream internet’s adoption of “their symbol,” despite the fact that it was never truly theirs, feels an awful lot like the anti-immigrant jingoism espoused by some Americans, despite the fact that their families were never truly native to this land, either. Origin and history have nothing to do with this toxic sense of possessiveness. It simply ceases to be anyone else’s once it becomes theirs.

There’s also a queasy applicability to the way the alt-right gleefully synonymizes Pepe with whatever reactionary bullshit they’re currently energized by, and the shameless way they use the frog to further a political agenda and insult, degrade, and offend any of their perceived opponents.

Meanwhile, Furie simply lets it be for so much longer than one would think, because he’s a positive person. It feels akin to the fruitless, “They go low. We go high,” sentiments many liberals adopted during the lead-up to the 2016 election. We all gape at the way the rules don’t seem to matter, and then scratch our heads when cheaters win.

Feels Good Man plays out, ultimately, like a proud parent’s quest to snatch their child back from the thorny, foreboding forest of faerie land. In this case, the faeries live in cyberspace, and the child has green skin, a mouth of red round lips (or, as described by InfoWars’ Alex Jones in a deposition for his lawsuit, “more tubular than round”), and a cheerful disposition. You watch Matt struggle to get his kid back. Whenever it seems impossible, it hurts.

Billie is a horror obsessed writer with a love of Giallo, Vincent Price, and any horror movie set in the West. She can't wait to tell you about how Videodrome is a sci-fi horror love letter to trans girls like her.
Previous Scream n’ Stream: Inside Central Florida’s Hottest Halloween Ticket
Next Doom Metal Act VÖLUR Details Upcoming Album