Ten years ago this month, a new horror movie monster was born. In a world of found footage, zombies, and demonic possessions, deformed hunchback Victor Crowley lumbered out onto the screen at the Tribeca Film Festival on April 27, 2006 in Adam Green’s Hatchet. Green both wrote and directed the film, his first horror feature, and shelled it out to film festival after film festival until finally garnering the notice of Anchor Bay Entertainment, a technique that paved the way for future independent movies to get recognition. 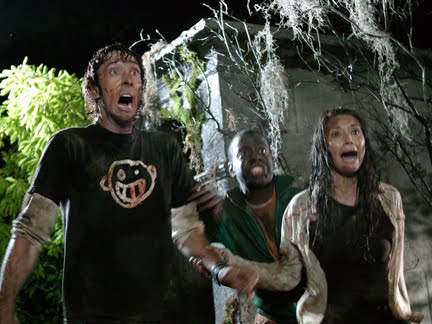 Despite being new to the scene, Green managed to get quite a few recognizable faces to act in Hatchet, including cameos from both Robert Englund and Tony Todd, plus Buffy the Vampire Slayer’s Mercedes McNab, The Blair Witch Project’s Joshua Leonard, One Crazy Summer’s Joel Murray and The Cosby Show’s Kenny – Deon Richmond –  along with horror badass Kane Hodder to play a dual role: both the infamous Crowley and his own father in the flashback scenes. Friday the 13th Part VII: A New Blood’s John Carl Buechler also signed on, not only creating the award winning practical effects for Hatchet but also in a cameo as the old rowboat hobo named Joe Cracker.

The story for Hatchet is not very original – a New Orleans urban legend comes alive and kills off a bunch of lost swamp tourists. Yet it’s not the story that people want when they watch this straight up, no frills slasher – it’s the fantastic, over the top practical effects and the throwback ‘80s feel that they love. The film has a fly-by-night approach that makes it campy yet fun, a result of Green’s inexperience as a director and the tiny budget not allowing for many retakes – a drawback that actually works for the film. Like Halloween (1978), Night of the Living Dead (1968) and The Texas Chain Saw Massacre (1974) before it, Green’s naïve, simplified filmmaking style created a fresh film that fans have come to love. Hatchet is a bloody love letter to slashers of yore. Green pays homage to films like Peter Jackson’s Braindead (1992) with its buckets of gore and flailing and dismembered limbs, along with straight-up slashers like Meatcleaver Massacre (1972) and The Toolbox Murders (1978), never wasting its time on things like characterization or filling plot holes. The ever present, monosyllabic man with an unending lust for blood during a random American holiday reminds us of Michael Myers. Of course, the most obvious nod is to the Friday the 13th films. Although the setting is slightly different, there’s still a parent obsessed and a pissed off, undead mongoloid whose legend revolves around an eerie body of water. Where it differs, of course, is that Hatchet never takes itself seriously. Everyone knew from the get-go that there would be more comedy than horror in Hatchet, and that was exactly what we got.

Another similarity to the first two Halloween films is the fact that, after taking out the opening and closing credits, Hatchet and its two successors – 2010’s Hatchet II and 2013’s Hatchet III – can be linked together to form one long, continuous slasher film, as each movie picks up at the exact moment where the previous one left off. Green has even said in interviews that, should he ever get the rights to his films back, he would loop them all together into one movie, possibly even adding scenes and kills that were initially cut from the originals. Now that would be something any Victor Crowley fan would love to see.

You can’t talk about Hatchet without bringing up the gore factor. For such a small budget, Buechler was able to create one of the bloodiest, most outrageous films I’ve seen in a long time. Unlike torture porn films like Saw (2004) and Hostel (2006), Hatchet’s gore is so over the top and silly that, even though a woman’s head is literally torn from her body, you can’t help but laugh when you see her tongue still bopping around. Green poured his heart and soul into Hatchet, bringing back to the big screen the things he loved as a horror fan growing up in Massachusetts. He even created a “No CGI” rule for the film, only allowing digital enhancements to remove wires and camera setups in post-production. In this time of computer generated ease, Green pulled out all the stops to keep his film as earthly as possible.

Hatchet is well on its way to becoming a mordern classic. If you haven’t done so, you’d better watch it immediately. It will not dissappoint.

As the co-owner and Editor-in-Chief of PopHorror.com, Tracy has learned a lot about independent horror films and the people who love them. Now an approved critic for Rotten Tomatoes, she hopes the masses will follow her reviews back to PopHorror and learn more about the creativity and uniqueness of indie horror movies.
@Icing_Yousing
Previous Ash vs Evil Dead Season 2 Release Date, New Actors!
Next Review – Zombeavers (2014)