On July 18, 2016, the sci-fi classic Aliens turned 30. Thirty years old! That’s as old as “Party All The Time” by Eddie Murphy! It sounds like a big number, but despite being made nearly three decades ago, Aliens has withstood the test of time to become one of the greatest sci-fi horror films of all time – and certainly one of the best horror sequels ever made. Its lines are endlessly quotable, its characters are memorable and multi-layered, and the xenomorphs are horrifying and compelling as the face of the series. Oh, and it was nominated for seven Academy Awards. So what’s the story behind this sci-fi horror masterpiece?

At the end of 1979, there were already talks of making a sequel to Alien; however, some higher-up shuffling of power prevented it from being made until many years later, when Fox had settled a lawsuit regarding the distribution of profits from the first film. Once the dust settled, the desire to make a sequel was still there, and Fox moved forward.

James Cameron, having just entered pre-production on the first Terminator movie, was tapped early on to direct the Alien sequel by David Giler, owner of Brandywine Productions and partner with 20th Century Fox. Giler was drawn to Cameron not just because he was an up-and-coming sci-fi director, but also because he had written the script of Terminator himself. Fox’s new president at the time, Larry Gordon, was impressed by the script and told Cameron that if Terminator was a success, that he would be director of the Alien sequel. Cameron delivered on his end of the deal, with The Terminator topping the American box office for two weeks straight.

Of course, going into the production of Aliens, no one on the set would know of Terminator’s future success; the film hadn’t even been completed yet. The film’s assistant director, Dick Bush, continually questioned Cameron’s decisions and was openly antagonistic towards him. Ultimately producer Gale Anne Hurd (Cameron’s then-wife) had no choice but to fire him; in response, he briefly instigated a mass walk-out from the rest of the crew. Fortunately, this was quickly resolved (Bush was replaced by Adrian Biddle), but caused some doubt as to whether the film would make it to completion.)

Cameron, having already completed the script for Aliens while working on The Terminator, was excited by the opportunity to create an entirely new world for the film, and opted not to follow the same formula as Alien, but to create a worthy combat sequel focusing “more on terror, less on horror” AKA mad space action.

One of the first things Cameron did was request Sigourney Weaver to reprise her role as Ripley. Weaver had initially been very hesitant to reprise the role, rejecting numerous offers from Fox Studios to do any sequels, fearing that her character would be poorly written. However, after meeting with James Cameron personally, she was so impressed by the high quality of the script that she finally agreed to do the film. However, there was the task of appeasing Weaver’s contract; which Cameron, determined to make the film, devised a scheme. Telephoning Arnold Schwarzenegger‘s agent (informally, of course), Cameron informed him that, thanks to his newfound standing in Hollywood following The Terminator, he had decided to be extra ballsy by writing Ripley out. As Cameron anticipated, Schwarzenegger’s agent immediately relayed the information to his colleague representing Sigourney Weaver at ICM, who in turn contacted 20th Century-Fox head Lawrence Gordon; both men determined that, under no circumstances whatsoever, would Ripley be written out and wasted no time in sealing Weaver’s deal. I guess that’s one way to solve a contract dispute!

And so, having secured Weaver, Cameron set about to fill in the rest of the cast. Having been heavily influenced by Starship Troopers (the book), Cameron made all of the Marine actors read the book prior to filming. Additionally, he had all of the actors (and actresses) undergo military training together in order to accurately portray their on-screen camaraderie. In fact, the opening scene of the soldiers in the mess hall together was one of the last sequences filmed; all of the actors were friends at that point and had been given a chance to bond off-screen. 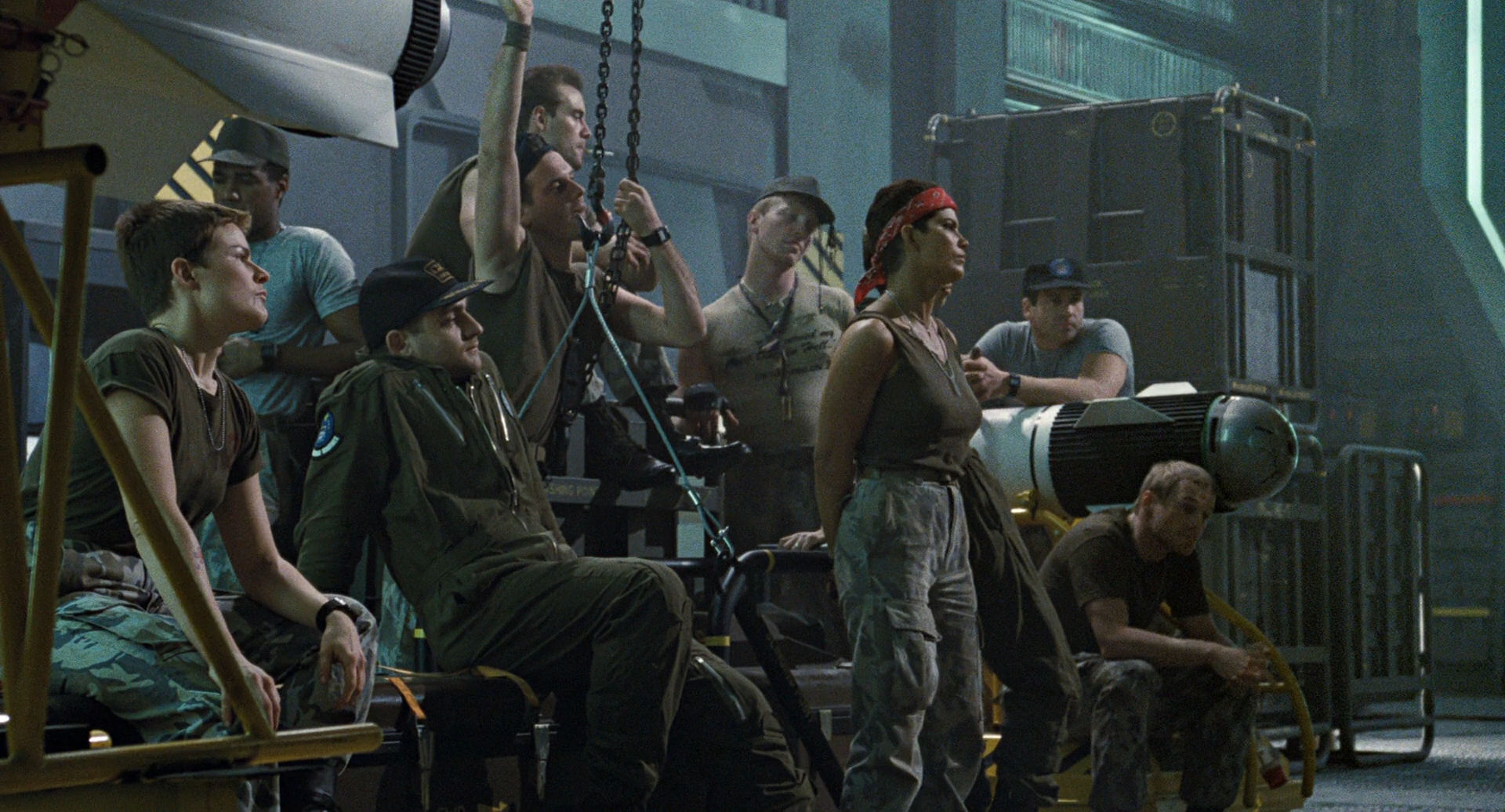 Cameron’s detail to realism is seen in numerous subtle ways throughout the film, oftentimes through timing and setting. For example, in a scene when the marines are landing on the xenomorph planet, Apone tells the Marines they have ten seconds until they arrive; counting from there until the first Marine jumps out of the carrier and his boots hit the ground, it is legitimately ten seconds. Additionally, in both the standard and special edition versions, the fifteen-minute countdown at the end of the film is indeed fifteen minutes. Pretty badass for a detail almost no one would otherwise notice.

Another little detail that Cameron encouraged was letting the Marine actors personalize their own battle armor and fatigues for added realism – much like how soldiers in Vietnam wrote and drew things on their own helmets. (Coincidentally, according to Lance Henriksen, during the production of Aliens, Full Metal Jacket was also being shot at a nearby location. In fact, the crews of each movie would often gather together for parties. Makes sense.) Actress Cynthia Dale Scott (Corporal Dietrich) has the words “BLUE ANGEL” written on the back of her helmet, a reference to Marlene Dietrich in The Blue Angel; Bill Paxton has “Louise” written on his armor, a dedication to his real-life wife, Louise Newbury; and “El riesgo siempre vive!” can be seen scrawled in white across Vasquez’s armor, which literally translates to “Risk always lives!” Lots of detail was also put into the and sets for the film. When Fox heads saw an early cut of the film, they complained to Gale Anne Hurd that it looked like the money had all been spent on sets rather than special effects. Hurd apparently took great delight in telling the execs that a majority of the sets that they were seeing in the film were indeed miniatures or optical effects created by Syd Mead, whose work can also be seen in Blade Runner.

For the score, composer James Horner was forced to cannibalize previous scores he had done, such as elements from The Wrath of Khan and The Search for Spock. (He stated that James Cameron had given him too little time to write a musical score for the film.) Horner said that tensions with Cameron were so high during post-production that he assumed they would never work together again. However, Cameron loved the score from Braveheart (made 9 years later) so much, the two mutually agreed that Horner would write the score for Titanic. The two got back together again to work on the score for Avatar in 2009.

When Aliens was released, it immediately garnered critical acclaim, being nominated (as previously stated) for seven Academy Awards, one of which was Best Actress for Sigourney Weaver; it was the first ever for an actress in a role in an action movie. The film cemented the series’ legacy, eventually leading to two more movies (Alien3 and Alien Resurrection), as well as comics, toys, video games, and a wide assortment of other media. It is widely regarded as one of the best in the series and one of the best in its genre. Its unique focus on the mother-daughter bond between Ripley and Newt, and the humanization of the marines made Aliens an instant classic.

July 18th is the anniversary date, and we can tell you where we’ll be: right in front of our TVs, re-watching this gem.

Seth is a writer and musician living in Los Angeles. When not explaining to strangers why John Carpenter's The Thing is the greatest horror movie ever made (trust me, it is), he's usually playing violin or hanging out in record store clearance sections. You can find him on Twitter and Facebook!
@kickkickseth
Previous Every Saw Film, Ranked!
Next 5 Underseen Found Footage Films