To all you horror fans out there just chomping at the bit to get your hands on 2015’s Volumes of Blood, here’s your chance! The film was just released through VOD and is available on Amazon Prime. Your Prime membership can actually be good for something besides getting all of your Christmas presents in two days. Now you can use it to see the ultimate in goretastic horror!

This was the film that started it all. Last year, producer/director PJ Starks and his affable yet adept crew – including directors Nathan Thomas Milliner and Justin M. Seaman, co-producer Eric Husskisson, The Walking Dead’s Moses Moseley and special effects artist Cassandra Baker – created one of the most talked about indie horrors of the year: Volumes of Blood: Horror Stories. The film became a smash hit and even made it onto PopHorror’s Favorite Horror Movies of 2016 list. A year before Volumes of Blood: Horror Stories, Starks (Three Tears on Bloodstained Flesh 2008) wrote/directed/produced Volumes of Blood following his idea of a horror anthology taking place inside a library and ran with it. The concept: a bunch of films within a film within a film. Confused yet? 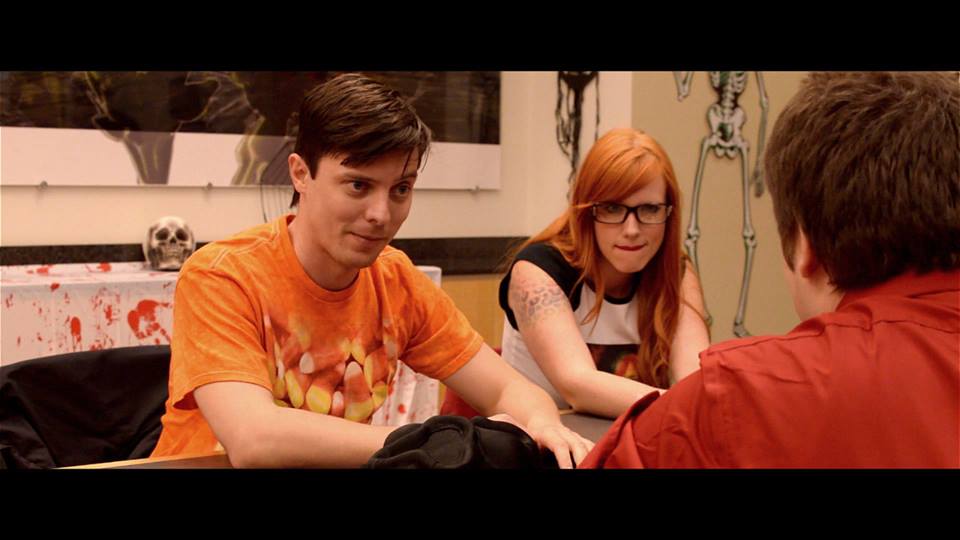 The wraparound story, conveniently titled “It’s A Wrap,” was directed by Lee Vervoort (The Truck 2013) and tells the story of four sociology students discussing urban legends. Each student makes up their own urban legend on the spot – something they think will spread throughout the school in record time. The only parameters are that their stories have to be scary and they have to take place in the library. The first urban legend idea is called “A Little Pick Me Up” and was directed by John Kenneth Muir (Nightmares in Red, White and Blue: The Evolution of the Horror Film 2009). A young woman trying to study late at night at the library just can’t seem to concentrate. Along comes the sketchy, sunglasses-wearing Lucem Ferre who offers the girl a new product on the market – an energy drink called Ka-Pow! that lasts for hours, tastes great and has no crash. A college students dream come true, right?

The second story is called “Ghastly” and was directed by Starks. This one is about a library clerk who, while putting books away, stumbles across a novel called “Ghosts” by Luchem Ferre (the sketchy guy from the first story, natch). He puts the book away, but seconds later, it’s right there in front of him. Behind him and always out of the clerk’s vision is a pale, dark haired, Ring-like ghost. What does it want?

“13 After Midnight” is next and was directed by Jakob Bilinski (Three Tears on Bloodstained Flesh 2014). When Sidney finally gets rid of her slacker, booze chugging boyfriend, she finally relaxes enough to get some studying done in the closed library. She passes out only to wake up hours later, disoriented and unable to stand. In the darkened building, she sees a hairy, skull faced monster staring at her. What does this creature want from her? The fourth and last story, directed by The Confession of Fred Krueger‘s Nathan Thomas Milliner, is the fourth and last urban legend tale. “Encyclopedia Satanica” has library clerk Paige working alone while distraught over the recent suicide of her boyfriend. A friend shows her a strange book that explains how to call spirits back from the dead. She follows the directions to talk to Derek one last time, but she gets more than she bargains for when he finally appears.

The film then turns back to the wraparound story, where it appears that the movie is about to end. Not so fast! There’s more going on here than you ever could have imagined.

Volumes of Blood is a glorious and gut-churning jaunt into horror anthology films. I absolutely loved all of the nods to other horror movies – everything from character names (Norman and Sidney, for example) to a debate on ‘80s slashers to the shots of DVD and books covers of works from the directors and writers to the, like, radical horror movie clip in the very beginning. There are also all of these little jokes like renaming Norman’s Jack Daniels “Friskey Whiskey” that were fun to find and kept me on my toes. Last but not least, the special effects and gore were top-notch, especially for a microbudget indie film like this one.

If you’re not an Amazon Prime customer, you can still grab the DVD or Blu-ray from LeglessCorpse.com, or wait for its immenant release through Walmart, Target, Best Buy and Barnes & Noble.

As the co-owner and Editor-in-Chief of PopHorror.com, Tracy has learned a lot about independent horror films and the people who love them. Now an approved critic for Rotten Tomatoes, she hopes the masses will follow her reviews back to PopHorror and learn more about the creativity and uniqueness of indie horror movies.
@Icing_Yousing
Previous Teaser Trailer for Season 2 of Stranger Things Brings Excitment and Suspense!
Next Check out the KickStarter for ‘Stirring’ A New Christmas Themed Horror Movie