The ‘My Bloody Valentine’ Remake Was a Total Win

Paul Aloisio February 12, 2016 Editorials, Reviews Comments Off on The ‘My Bloody Valentine’ Remake Was a Total Win

Nostalgia can be a really funny thing sometimes. It can make even the best of us form opinions based on feelings that are accessed only by our deepest, far-reaching memories. It can even trick our brains into thinking that something only subpar is actually exceedingly well-done, as is the case with 1981’s My Bloody Valentine

. And while that film is a fun little Canadian entry into the slasher subgenre, everything besides the concept of the original film is more or less forgettable. So when the remake of this funny little film came out in 2009, nostalgia reared its deceitful head and tricked many into thinking that there was no possible way that the remake could be any good. Put frankly; in this case, your own feelings of nostalgia are lying to you. My Bloody Valentine 3D (2009)

succeeds in almost every area in which the original fails.

Which is not to say at all that the 1981 version is loathsome in any way; but really, it was kind of cringeworthy at times. Call it cheese, call it fun, call it whatever you want, but the ending song during the credits of the film is laughably bad, with a cop-out ending to push it over the edge from excusable to just plain lazy. It’s a fun movie to watch and smirk about the corniness of the kills and one-dimensional characters, but if Harry Warden was not included in the film, no one on this planet would be talking about My Bloody Valentine 3D in 2016. It had all of the right ingredients for a great movie… it just couldn’t execute them properly. 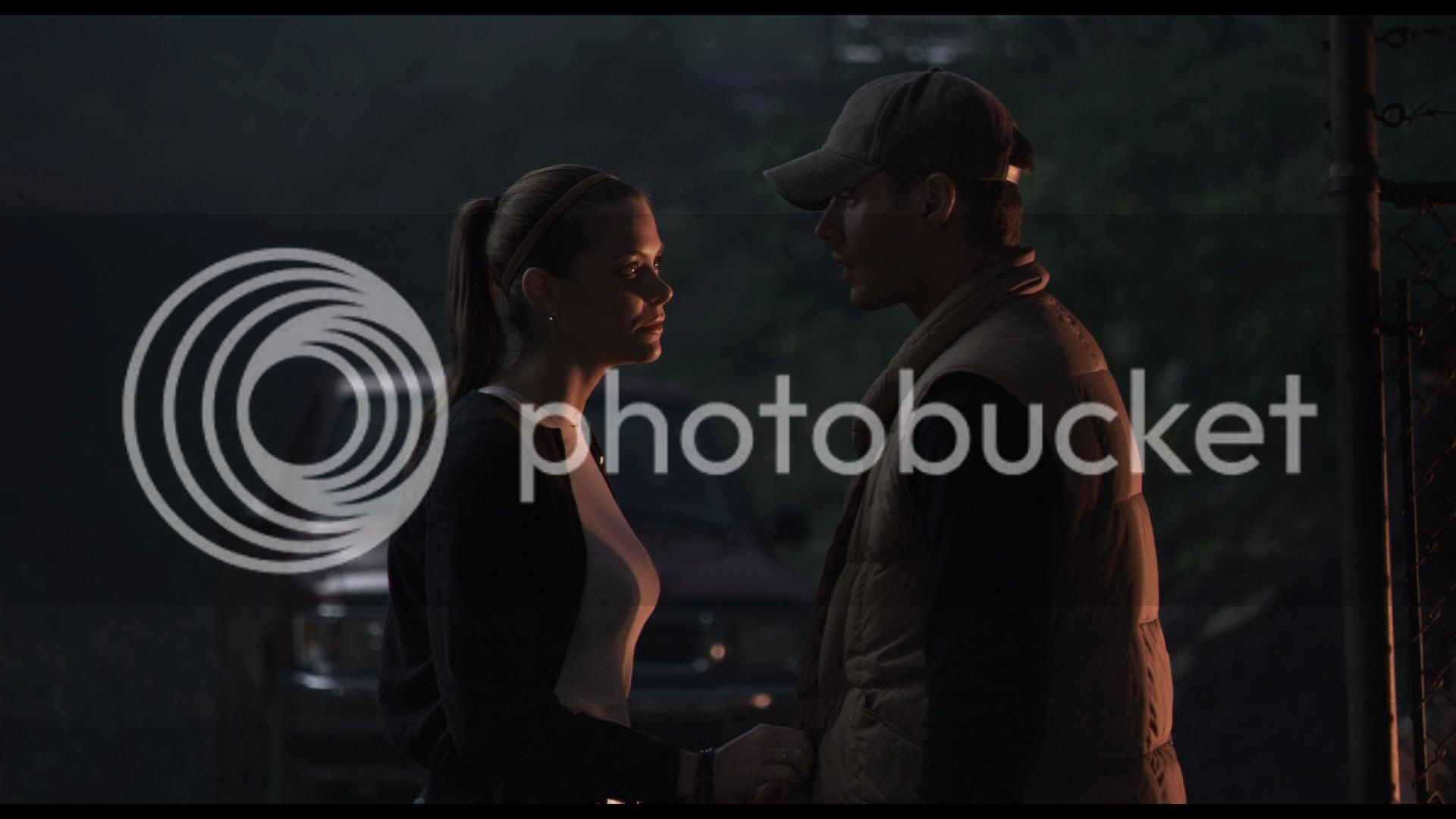 This is where the remake comes in. The lead is taken up by Jensen Ackles of the television show Supernatural

, and he is an absolute delight to watch as Tom J. Hanniger, a man who has clearly been through a lot. Years prior, he was somewhat responsible for the death of almost a whole mining operation, which in turn caused a man named Harry Warden to start a murderous rampage on Valentine’s Day. After the rampage, Hanniger left the town to an undisclosed location, only to come back when his father who owned the mine dies. As he returns to prepare to sell the mine, unwanted feelings of dread and despair are brought back up, along with a string of brutal murders. Rumors of Harry Warden’s return run amok, despite the common knowledge of his death after his original rampage, leading the viewer down a road of mystery and gory murders shot in beautifully executed 3D.

Ackles brings the role to a convincing depth that we never got to see in Stephen Miller’s original screenplay. The feelings of jealousy and confusion brought about by the character’s return add to a sense of serious tension and drama that is non-existent in the movie’s original incarnation. Writer Tom Farmer even had enough foresight to bring in a fan-favorite from the golden era of cheesy slashers with the addition of almost-always-moustached Tom Atkins. Clearly, Farmer was trying to do everything in his power to make up for that whole “send Jason to space” thing that he did in…well, who cares when he did it. Let’s not talk about that movie. I’ve moved on since then, and you should, too. Pairing Atkins with a more recent name in the genre like Ackles was a very wise decision. Most of those still clinging to nostalgia while watching My Bloody Valentine 3D

will be able to satiate at least some of their hunger while adding in newer faces that will hopefully one day be able to induce the same nostalgia that Captain Mustache is able to. (Editor’s note: I love Atkins, and I mean absolutely no disrespect, but I’ve always also wanted to refer to him as Captain Mustache. I can’t help myself sometimes.)

The supporting cast is great in their own right as well; Jaime King and Kerr Smith both add a lot of emotion to the script. The two of them, who play husband and wife Sarah and Axel Palmer respectively, make a good duo. The confusion that Ackles’ character brings into their lives upon his return is clearly laid out for the viewer to sort through. Patrick Lussier, director of the film, directed them into very human and believable territory through Farmer’s script, and while the script does take some liberties with the overall storyline, no one is claiming that MBY3D is a perfect film. It’s highly enjoyable and very, very good, but not perfect.

Call the 3D usage in the film a gimmick all you’ll want, but you have to remember that the original film had a gimmick as well; it was cashing in on a genre with each new motion picture rushing to turn a new holiday that hasn’t been exploited yet in a horror film. Which is the worse crime? All successful slasher films have a gimmick. My Bloody Valentine 3D

cashes in one three of them while doing all of them successfully. We have a remake shot in 3D based on a film geared towards making a Hallmark Holiday scary. The fact that it could do any of these even somewhat decent is a miracle in itself.

If watching severed body parts and pickaxes fly towards you at breakneck speed isn’t your thing, then that’s fine. The film still holds up in standard format. The kills look fresh and original while also being done with mostly practical effects, which as every horror fan knows, is almost always a key ingredient to winning our bleeding hearts. However, the effects work in this movie is really something to behold, improving vastly on previous attempts at 3D horror (Friday the 13th part 3

, I’m looking at you). It’s worth noting as well that the movie was the first to be released in the modern RealD 3D technology while maintaining an R-rating from the MPAA. Again, another success. The film could have been edited to appeal to the more profit-friendly PG-13 audience, but instead chose to keep its original goal of having a horrific three-dimensional experience intact.

The violence in this film does get incredibly gritty at times, with the scene in which Harry Warden is pursuing a very naked and very scared Irene after an intimate motel session with a trucker, who actually happens to be played by Farmer himself. Like any respectable horror movie screenwriter, his cameo ends with him being sent to the great mine in the sky by way of pickaxe through the head. The kill is done with excellent practical effects and sets a standard by which all other kills in the film are to be judged by. Moving back to the original, it’s important to note that the 1981 version of My Bloody Valentine

was not terrible… it just wasn’t all that great in comparison. It had a surprisingly interesting plot while using the holiday gimmick to its advantage, and the setting of Valentine Bluffs gave a fresh atmosphere to the film, contrasting greatly with the dirty mines in which much of the violence takes place later in the film. There actually are a ton of things to love about the original, including a couple of key Easter Eggs hidden in there. Consider this: the day in which Valentine’s Day falls during the movie is Saturday, February 14th. That’s sure to make you smile once you figure out what the day before was.

The kills are good and decently gory, but unfortunately, still seem pretty tame as a whole. Had the movie gotten away uncut by the MPAA, this article may not have been written. Due to the backlash against previous slasher films, much of the gore was taken out of My Bloody Valentine, including a shot at the end in which Axel rips his own arm off to make his escape. Unfortunately, that cut may never see the light of day and will forever remain in a decaying Nova Scotian mine. Well, probably not in that exact place. I was trying to be witty or something.

Until that day, the remake will remain the stronger version of the two. Nostalgia can be a kind and welcome friend; other times it is confusing and misleading. If you hate remakes and think that they can never surpass the original, rewatch the 2009 version of My Bloody Valentine. You’ll be pleasantly surprised.

He can be found crying lonely in a ditch somewhere off of an abandoned highway on a cold, cold night. His favorite movie is "Sex and the City 2." It's terrifying.
Previous Retro Review – Valentine (2001)
Next 10 Not-So-Cuddly Animals In Horror