‘The Lodgers’ is Now Available on Blu-ray!

Kenn Hoekstra May 31, 2018 News Comments Off on ‘The Lodgers’ is Now Available on Blu-ray!

Dread Central Presents is proud to announce the release of their supernatural thriller: The Lodgers. The film follows hot on the heels of the company’s recent success with their killer clown slasher Terrifier. Loaded with special features, the Blu-ray/DVD combo pack includes a variety of language audio tracks and subtitles in ten languages.

In this gothic supernatural thriller, a family curse confines orphaned twins Rachel and Edward to their home as punishment for their ancestors’ sins. Bound to the rules of a haunting childhood lullaby, the twins must never let any outsiders inside the house, must be in their rooms by the chime of midnight, and must never be separated from one another. Breaking any of these three rules will incur the wrath of a sinister presence that inhabits the house after midnight.

While Edward is committed to this ill-fated life, he’s becoming more unhinged due to the fact that Rachel is not. Smitten by a local soldier, Rachel grows skeptical and begins to rebel, desperate to escape the oppression and misery of their captivity.

Here’s a look at the Blu-ray artwork!

The Lodgers is now shipping in an all-region Blu-Ray/DVD combo pack at a suggested retail price of $19.99. You can also rent the movie or buy the digital code on Amazon. 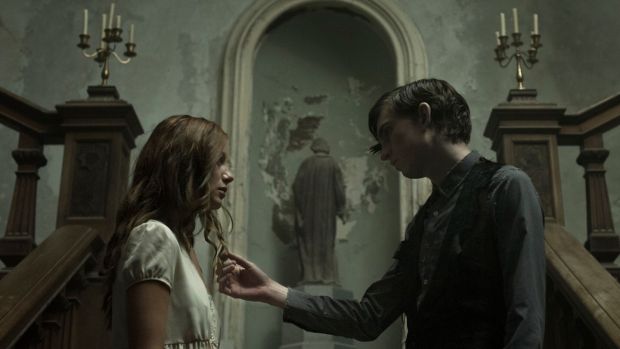 Very cool! Dread Central Presents has been on a roll lately. They’ve really been putting out some high quality releases. This looks like no exception!

What do you think? Will you check out The Lodgers? Tell us in the comments!