The King of Horror Stephen King has frightened readers and audiences for decades with his tales. But, what are his biggest horror recommendations?

The British Institute, along with Bloody-Disgusting.com, announced a season of film and television dedicated to the King himself, known as Stephen King On Screen! The season will take place at BFI Southbank from September 1st through October 3rd, and will include some of King’s greatest works, including Stand By Me, The Shining, Carrie, and The Shawshank Redemption. Also, there will be talks and discussions, and a special birthday weekender (September 21st-23rd), including a Stephen King Film Quiz and a Stephen King Summit. Tickets are on sale for BFI members on August 1st, and available to the general public on August 8th.

King also selected five of his personal favorite horror films to screen at BFI Southbank. The films will run alongside Stephen King On Screen. Check out his five selections and his reasons for choosing them below! 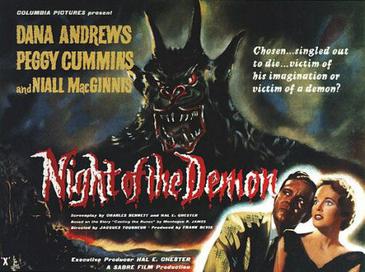 “Although it’s old school, I love Jacques Tourneur’s Night Of The Demon, a pretty wonderful adaptation of M.R. James’ story, Casting The Runes. Tourneur was a disciple of Val Lewton, which means the horror here is pretty understated until the very end.“

“On the subject of British horror (wrapped in a sci-fi bow), you can’t do much better than Village Of The Damned, directed by Wolf Rilla, and, like Night Of The Demon, shot in beautiful black and white. It’s an adaptation of The Midwich Cuckoos by John Wyndham, and George Sanders does a stellar job as the schoolmaster tasked with teaching some very strange pupils.“

“For supernatural horror, I like Peter Medak’s film, The Changeling, starring George C. Scott in perhaps his last great screen role. There are no monsters bursting from chests; just a child’s ball bouncing down a flight of stairs was enough to scare the daylights out of me.“

“The Hitcher is a terrifying road movie stripped back to basics. What sets this apart, other than some spectacular stunts, is the amazing performance of Rutger Hauer as the mysterious and homicidal John Ryder. ‘Where did you come from?’ asks the terrified kid Ryder is chasing. ‘Disneyland.’ Ryder whispers back.“

“While we’re talking about terrified men who come from nowhere, there’s The Stepfather, with Terri O’Quinn as the murderous (but charming) psycho looking for a family to love him. There’s that classic moment when he goes blank and says, ‘Say, who am I this time?’ Before bludgeoning his wife with a telephone.”

I basically grew up watching horror films and spooky things. I watched my first horror film when I was 4 years old. I've wanted to be a writer ever since I've read Stephen King books in middle school. I love writing and talking about my favorite genre. I hope to one day be successful in screenwriting and filmmaking. Everything horror, of course!
@Karli_Ray
Previous Your Favorite Puppet Is Back in ‘Puppet Master: Axis Termination’
Next ‘Alien: Reign of Man’ Trailer Announcement