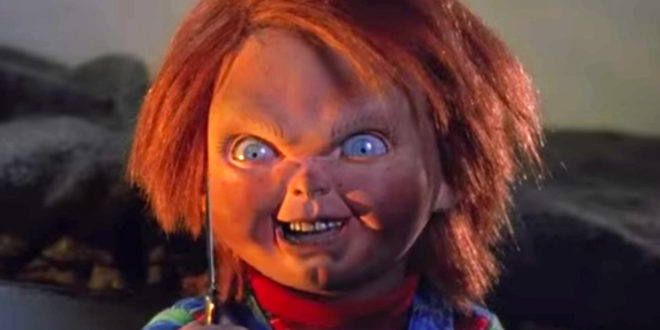 I spent most of my day at work, so when I got home to find out per Bloody Disgusting that the original creators of Child’s Play are developing a TV series… I was super stoked!

Don Mancini wrote the original screenplay for Child’s Play as well as directed the last three Chucky films including Seed, Curse, and Cult. The fun isn’t stopping with Cult, though! Mancini has announced he will be developing a new Child’s Play TV Series along with franchise producer David Kirschner!

According to BD, the ending of Cult of Chucky was an intense setup for an 8-part, hourlong series that will keep Chucky canon. It will continue to be darker and creepier than ever before.

“We plan to use Child’s Play in the title,” Mancini explained. “We want to definitely signal that we are going dark, darker than ever before. It’s going to be very creepy.”

Although we don’t know much about the TV series yet, one thing we know for sure is that Brad Dourif will return to voice Chucky! And in the end… that’s all that really matters. Fingers crossed that Tiffany will make an appearance on the show if not a permanent one!

We can’t for this Child’s Play series to happen, what about you? Let us know!

Tori has had a passion for Horror and music ever since she was a little girl. She got bit by the writing bug in high school where she was involved in both the school newspaper and the yearbook. While getting her Bachelors degree, she took Journalism and Creative Writing classes where her passion grew even stronger. Now, in between work and family, she spends all of her spare time indulging in music, Horror movies, and nerdy fandoms, all while running/assisting one of the biggest Horror groups on Facebook and writing for various websites.
Previous ‘Psycho’ Star John Gavin Dead At 86
Next ‘Black Hollow Cage’ (2018) Movie Review: A Mind-Bending Horror Thriller